Donald Judd – American post-war artists who changed the face of sculpture. His monolithic structures that challenged the established forms of sculpture. He rejected the tradition of artistic expression and craftsmanship by using industrial materials such as Plexiglas, sheet metal and plywood, and from the mid-1960s his works were fabricated by external manufacturers. His work informs us about art, light, architecture and politics. What a genius one of my favourite sculpturers. 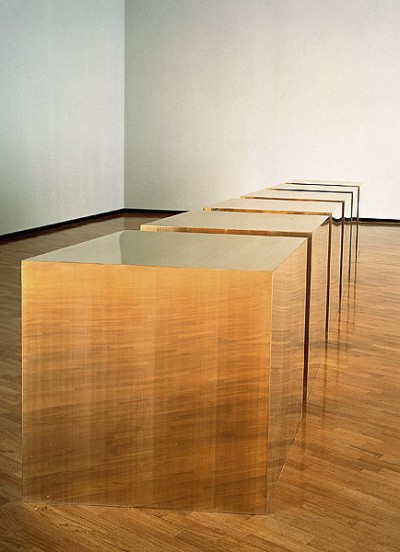 Though historically sculpture might have been rooted in the figurative and decorative, clearly from the point at which Marcel Duchamp declared readymade objects to be art, all bets were off about what could become sculpture and how and why this might happen. And, along with readymade objects, industrial materials and processes have long been legitimate territory for artists. Like other artists broadly known as minimalists – though it was a term he rejected – Donald Judd focused his attention on the inherent qualities of his materials which he used in a simple, straightforward way making ambiguous works that act as sculpture but often seem, in some way, closer to functional objects.